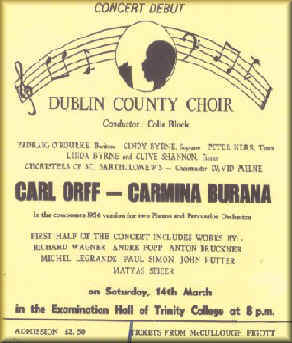 TCD, 14 March 1981
Colin Block always aims high. He chose no less a piece than Carl Orff’s tricky “Carmina Burana” for this, their first public performance. What is more, he and they were successful and brought it off, most enjoyably, all 55 minutes of it.

TCD, 14 March 1981
I do not think that I ever heard a performance of the Beethoven C major Mass that so clearly realized the composer’s intentions, and that so diligently and impressively observed the spirit and the letter of his dynamics. From the softest pianissimo to the loudest fortissimo Mr Block had his choir not only observe the detail of the gradations but also the tone colour implied by them. In other words, for example, a pianissimo was not just a matter of volume but of tone and colour and spirit.

Colin Block, his Dublin County Choir and his Sernata gave us a wholly exhilarating performance of Carl Orff’s “Carmina Burana” on Saturday night at the National Concert Hall.

Colin Block, equally surely, inspired his choir and orchestra to an ideal, earthy, secular, splendid, precise, exuberant, heart-warming performance. Whether it is one of the great works of music or not, they made it seem so. This was their second performance in three years.

I hope that it may be done by them every other year to rejoice our hearts. If so, I hope that Mr Block will decide whether he wants the Latin pronounced in the German, English or “Vatican” way. I hope that he will settle for German, but Saturday’s mixture was unnerving from a choir with such splendid diction, let alone the impossibility of “cres-chis.” But it was a splendid victory, and truly.

There is no doubt that Mr Block has a way with his choir. They could thunder out the Dies irae without over being coarse. They showed tremendous stamina. Their soft singing was lovely and phrasing beautiful. Surely we have no better choir here at present: have we any to equal it?

The work, a strange mixture of minimal devotion and much operatic gesture, is a mine of magnificent music, and challenged the flexible, agile Dublin County Choir page by page. From the opening Introit and Kyrie to the final shattering Libera me the choir made the unbelievable credible, with their beautifully balanced, intonationally impeccable singing from ppp to fff. Their performance was the supreme tribute to their imaginative, miracle-working chorus master and conductor Colin Block.

The Sea Symphony came across as a pretty impressive, if rather exhausting piece to listen to. The choir was occasionally over-stretched by its complexities; yet their dynamic range, precisely placed words and rhythmic energy were winning in a piece which needs to be delivered with plenty of expressive certainty.

In Carmina Burana, the main chorus was formed by the Tallaght Choral Society and the Dublin County Choir, who produced the most expressively-focused, disciplined singing I have heard from either group.

Of the many performances of Carmina Burana I have heard over the last 20 years or so, this was by far the best.

It was good to hear Colin Block take a robust view on Saturday night when he conducted the Dublin County Choir and the orchestra of St Cecilia. Largely because of that, and because of the way everyone gave their best shot, the performance was enjoyable in spite of its limitations. The choir could produce a full-bodied sound, and although the men’s sections needed a more blended tone, the overall effect was secure; and there was a good contribution from those choir members who sang the small-group items. 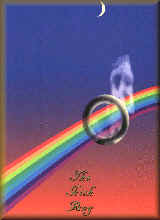 The Irish Ring by Balfe, Wallace and Benedict

Overall balance was not helped by the vocal amplification but this was off-set, to some extent, by the full-blooded singing of the Dublin County Choir.