Nearly 2,000 people joined the Dublin County Choir in the National Concert Hall on Sunday 8 December 2013 for our annual celebration, featuring

For our matinée performance, at 2.30 pm, we were joined by the Notre Dame Junior School Choir from Churchtown under their director Liz Foster. They impressed us with their varied choice of repertoire, including a lovely novelty number I can’t get to sleep, which ended with the choir in a somnolent posture. The 7 o’clock performance featured the Choir of St Brigid’s National School, Castleknock, whose director Niamh Williams drew a wonderful choral sound from her more than 80 charges.

As another addition to our regular line-up, this year we secured the services of a vibrant performing group, the Sax Sisters. This is all-female saxophone quartet performed on this occasion with a Sax Brother, standing in for one of their regular members who had just become a mother; they gave us a varied set of mainly Christmassy numbers, with polished and united sound.

Fergus O’Carroll’s RIAM Concert Band had audience and choir joining in with a great  medley of Christmas favourites. Soprano Niamh Murray, as well as introducing the various acts with wit and aplomb, wowed us with her solo contributions, tastefully supported by Celine Kelly on the piano. And the show culminated with the Concert Band, the Dublin County Choir, the children’s choir and Celine Kelly on piano, all under the baton of our Musical Director John Dexter, joining Niamh for a glorious rendering of Adolphe Adam’s O Holy Night. 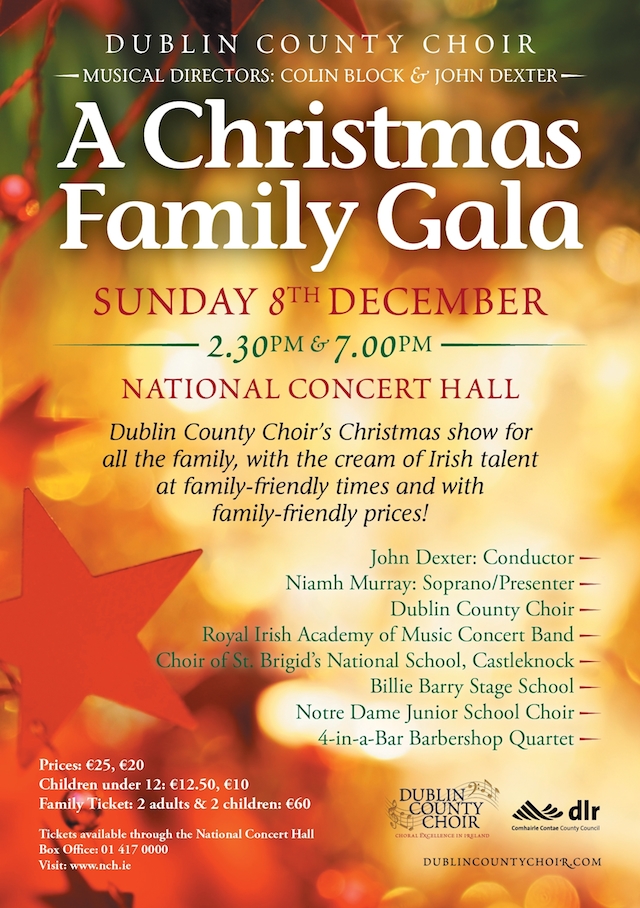 The Church of St John the Evangelist in Ballinteer, Dublin 16 witnessed a dramatic and witty recreation of the biblical Flood on Saturday 19 October 2013, when the Dublin County Choir, accompanied by Celine Kelly on the keyboard, Roger Moffatt on percussion and Neil Dexter on double-bass, gave a performance of Captain Noah and his Floating Zoo, by Michael Flanders and Joseph Horovitz. Musical Director John Dexter conducted, and Ciaran Judge (baritone) sang the parts of God, Noah—and Mrs Ham!

Joh Dexter also conducted the Choir and the same instrumental ensemble in some movements of Bob Chilcott’s Little Jazz Mass. The Choir demonstrated its wonderful vocal sound to best effect in the unaccompanied motet Locus Iste by Anton Bruckner.

The concert also featured the Rathfarnham Concert Band, under the baton of their Musical Director Vincent Kennedy, who entertained us with repertoire ranging from Bizet and Holst to Frankie Valli and Les Miserables.

And the evening was rounded off by Choir and Band under John Dexter’s musical direction with two movements—Tempus est jocundum and the dramatic final movement O Fortuna—from Carl Orff’s Carmina Burana.

This concert was part of the Choir’s continuing policy of maintaining links with the local areas from which it draws many of its members and much of its support. 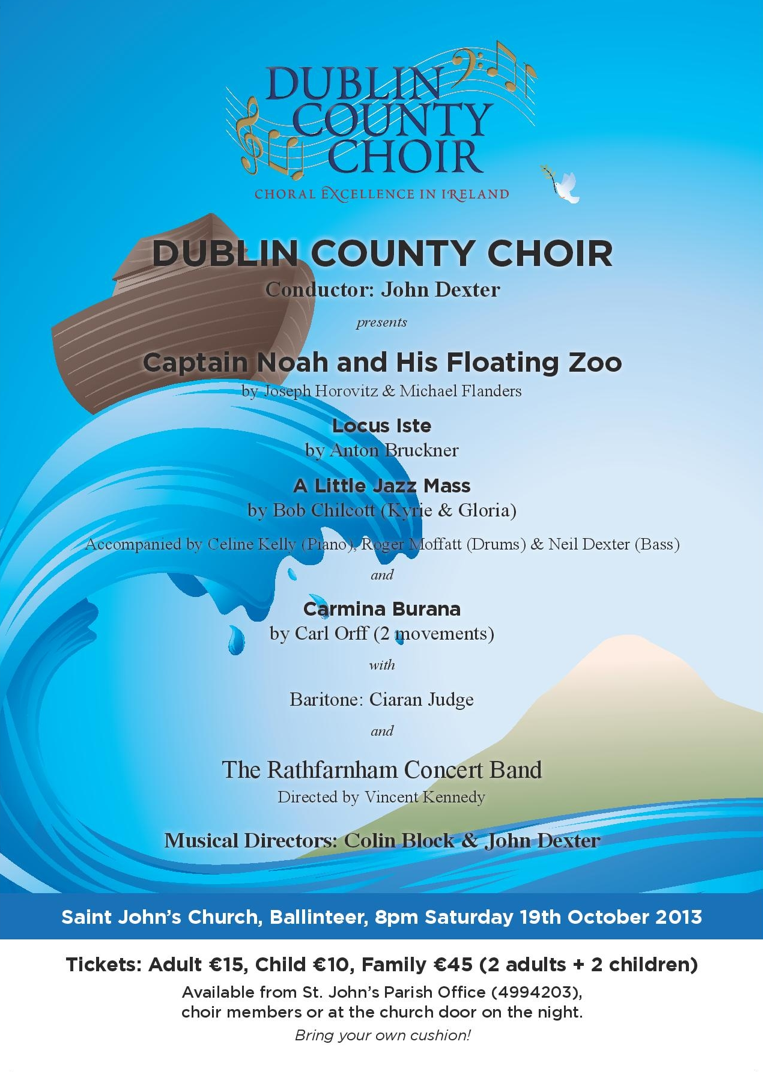 “Gloria – The Splendour of Choir and Brass”

Saturday 18th May 2013 in the National Concert Hall at 8pm

Liz Nolan, the ever popular Lyric FM personality, was the presenter at an unusual concert titled Gloria – the Splendour of Choir & Brass given by the 120-strong Dublin County Choir at the National Concert Hall on Saturday 18 May 2013 at 8pm.

Exciting brass and percussion sounds featured right from the start with the stirring
opening piece, Fanfare for the Common Man by Aaron Copland, played by the 13-
member sforzando Brass & Percussion.

The programme was wide-ranging, from the polychoral splendour of 16th-century
composer Giovanni Gabrieli to the delightful Little Jazz Mass by Bob Chilcott.
There were Glorias for choir and brass by Gabrieli, Mary McAuliffe, and the ever
mellifluous John Rutter. This last work made a most impressive finale for the
concert.

A substantial nod towards Benjamin Britten in his centenary year was made with
his moving short cantata Rejoice in the Lamb in a version adding percussion to the
organ accompaniment.

There is compositional talent within the choir too! The programme included a Magnificat in Irish by bass Brian Ingoldsby, who is currently taking a master’s degree
in Composition at Trinity College having qualified last year as a mature student with a Bachelor
of Music Degree at Maynooth.

The choir was joined for many of the pieces by soloists, Kay Lynch, Soprano; Mark Chambers, Countertenor; Jacek Wislocki, Tenor; and Jeffrey Ledwidge, Bass, and also by John Dexter on the organ and pianist Celine Kelly. As if this were not enough, the Earlsfort Brass Quintet entertained with, among other pieces, excerpts from West Side Story.

The whole ensemble was under the baton of the choir’s musical director Colin Block, who also devised the programme.