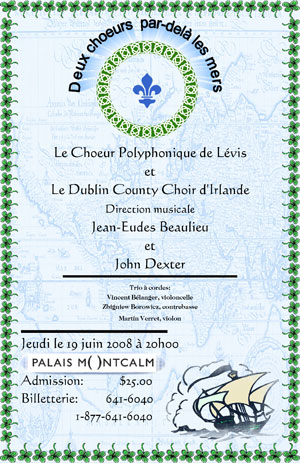 Le Choeur Polyphonique de Lévis, based across the notorious 1km wide narrows of the mighty St. Lawrence River from Québec proper, had invited us to celebrate the city’s 400th anniversary with them in a concert in the beautiful Palais Montcalm where the acoustic is said to be the best in North America. Chorus master John Dexter, who travelled to Québec with us, agreed with his opposite number in the Choeur Polyphonique a concert programme incorporating numbers in French, English, Latin, Italian and Irish! A learning CD helped the locals with their Irish blas, while the visitors adapted their school French to the distinctive sound of Québecois French.

A couple of intensive rehearsal sessions knocked the combined Irish/French-Canadian team into shape, and on the night a big audience, swelled by a remarkably large Irish diaspora, seemed to appreciate the results. (A spy in the stalls reported a whispered ‘Merveilleux!’ at the end of ‘She Moved Through the Fair’).

An extraordinary and moving addition to the trip was a visit to Grosse Île, organized by Marianna O Gallagher, the founder of Irish Heritage Québec, who has dedicated much of her life to promoting awareness of the contribution of the Irish diaspora to the development of Québec. This island in the St Lawrence estuary was the old quarantine station for the port of Québec, then the main entry point for immigrants to Canada. More than 7,500 victims of typhus, a huge proportion of them Irish emigrants, are known to be buried on the island. As a mark of respect to them the choir sang Ag Críost an Síol at the mass grave now marked with a glass wall monument.

Reluctantly leaving French Canada after a round of parties and dances, everyone involved understood that despite the vast ocean that lies between us, this wouldn’t be the last collaboration between these two choirs. 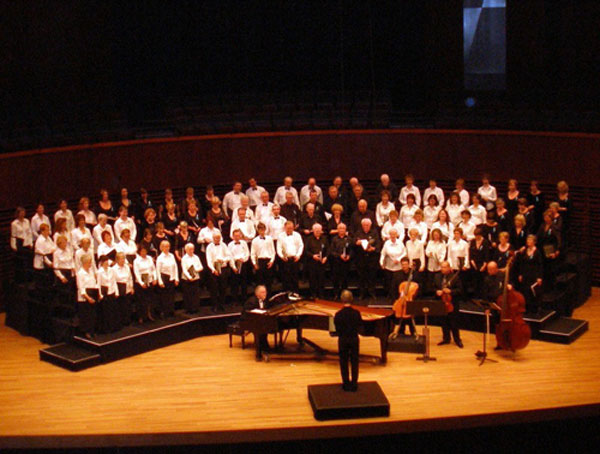 Combined forces at the Palais Montcalm

Midnight – the Hudson River looks like a fancy bracelet laid out with lights sparklin’ like rocks, shaken and stirred by the slow moving ferry ‘Spirit of America’. The covered deck is loaded with monkey-suited guys and evenin’-gowned gals. One of the guys takes out a small violin case. The sort that would make Joe Bananas or Tony Soprano think of air conditioning.

You know it as soon as he displays….a ukelele and they all begin to sing  “Start spreadin’ the noos, we’re leavin’ today…..New York, New York.”

This is no hoods’ convention, but the Dublin County Choir, led in this case by Brian Ingoldsby abetted by Chris McMahon et al (not that Al). All the singalongs are sung in four and eight parts as other members and choirs join in to unwind after the choral experience of a lifetime – performing to 2,500 people in Carnegie Hall ‘The Armed Man’ by Karl Jenkins. Jenkins himself had been in the audience.

For three days we in the DCC, along with choirs from Tennessee and England making up the full chorus of 250 singers, had worked hard polishing and rehearsing. It was a memorable experience and earned a standing ovation for the soloists, the conductor Jonathan Griffith, the composer and ourselves. After the performance both Jonathan  and Karl Jenkins stood at the side of the stage to shake everyone’s hand. Adding to it was the fact that DCC feels a proprietorial bond with The Armed Man as we premiered it in Ireland at The Helix.

The New York memory is special and as clear as yesterday.

Wish it was tomorrow.