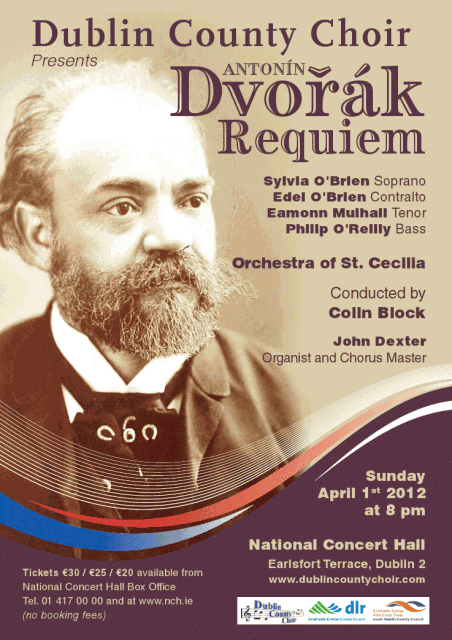 A big “Thank You” goes out to all the DCC’s supporters who attended our performance of Dvořák’s “Requiem”, a gorgeous piece which had not been performed in Ireland in many years, at the National Concert Hall on 1st April 2012 at 8pm.

Antonín Dvořák composed this Requiem mass for choir, soloists, and orchestra in 1890, at the beginning of his peak creative period. The construction of the mass is not typical: the composition is divided in two basic parts (conducive to an intermission – this piece is well suited to the concert hall), each of which begins with the original interconnection of several liturgical sequences. Likewise, Dvořák inserted between the “Sanctus” and “Agnus Dei” a lyrical movement, “Pie Jesu“, created on the basis of the final text of the “Dies Irae” sequence. Its basic melodic motif is created by two ascending half-tones and a very sorrowful diminished third, which begins the opus and continues in many variations as the main motif running through the entire work.

Dvořák himself conducted the first performance of this work in Birmingham, England, on 9 October 1891, shortly after it was written. Now, 120 years later in Dublin, you can experience it yourself, as performed by your own Dublin County Choir, the Orchestra of St. Cecilia, and all our talented soloists, under the baton of our director, Colin Block.